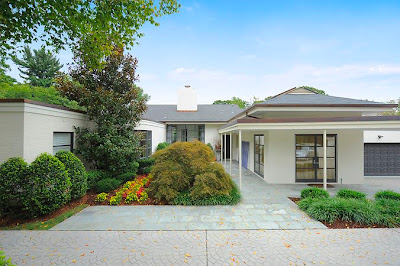 Check out the price drop on this Edward Durrell Stone-designed 1939 modern home. Now listed for $6.95 million, down from $8.5  million. Stone, best known (and derided) work in Washington is the 1971 Kennedy Center. He also designed the 1964 National Geographic Building on 17th Street. The 4 bedroom/6 bath home originally built by George Marshall, the then-owner of the Redskins, and his wife actress Corinne Griffith.

Marshall and Griffith were living in the Shoreham Hotel when Griffith saw the piece of land near Rock Creek Park and decided she wanted to build house there. Griffith called her interior designer in California and said she needed an architect to design a house for her in Washington. Enter Stone, who at the time had just finished the design for the original Museum of Modern Art building. Four years earlier, Stone’s Richard H. Mandel House in Mt. Kisco, N.Y., became the first International-style home built in the United States to be designed by a U.S.-born architect.

This house, which has been updated over the years, was also owned at one time by Jack Kent Cooke, another former owner of the Redskins. Today, it is owned by Debra Lee, the president and CEO of BET.

For more on Stone and his shift from a pure International style to his later more romantic modernism, read this fascinating Time cover story from March 31, 1958.