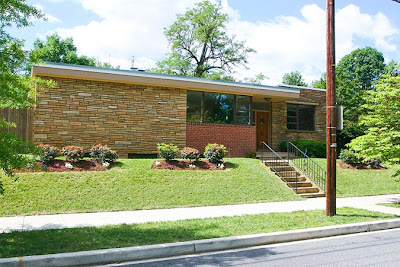 Here’s a nice flat-roof MCM located in the D.C.’s Crestwood neighborhood, which is has a number of mid-century modern homes as well as other styles. The home features a two-tone brick and stone facade. The stone is also used inside the house for the full-wall fireplace. There are ample windows, including nice sidelights around the front door and full wall in the dining room. The redone kitchen may be an acquired taste with all that blue and yellow. The listing has plenty of images or see it in person today (June 8) from 1 to 4 p.m.