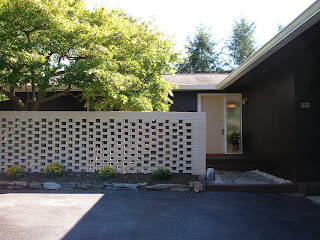 This 1962 MCM is located on Chilton Court, a cul-de-sac of seven other modern homes just off Old Dominion Drive in McLean. While I’m not sure who designed the home, which is in the Bryn Mawr neighborhood, but it definitely has that Eichler feel–from the abundance of glass right down to the California-style rock landscaping. The two-story home has four bedrooms and three baths with two bedrooms on the main floor and two on the lower level. The original kitchen looks so much better than the now cliche granite and stainless steel combo. One potential downside I saw was that there is a home being built in the lot behind the house. From the balcony seen in the listing‘s pictures, you can see the foundation going up. Likely will be a McMansion, but hopefully not. There was a lot a traffic at the open house on Sunday, so if you’re looking for a true MCM in McLean I would go see this one quick.