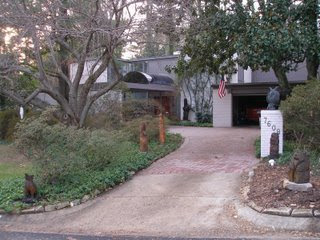 The Haft/Mirkin Residence
This flat-roof MCM located on Rossdhu Court in Chevy Chase was originally designed for Herbert Haft by his architect brother, Leonard. It was sold to the East Germany embassy in 1975 and then bought by the current owners, Dr. Gabe Mirkin and his wife Diana, after the fall of the Berlin Wall. They turned the home on more than half an acre back into a private residence with 6 bedrooms, 7.5 bathrooms, pool, koi pond and gallery space. Read more about the history of the house and Rossdhu Court, where you can find several other mid-century modern homes.