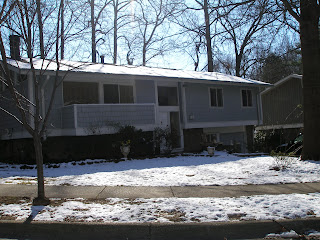 This listing is for a 1968 contemporary located in New Mark Commons in Rockville. The community, a Planned Urban Development, was developed by Edmund J. Bennett and designed by the mid-century modern architectural firm Keyes, Lethbridge and Condon. Bennett and KLC also built Carderock Springs.

“New Mark Commons was imagined as a progressive statement about what it would be like to live in Rockville in the future,” Steven Snapp writes in a history of the community. “It was designed to respect the environment rather than overwhelm it. Clustered on their eccentrically shaped, tree-shaded lots, the homes have an enviable sense of permanence out of proportion to their age. As one early example in innovative but regulated planning, the neighborhood offers lessons for anyone who cares about how their city will be shaped in years to come.”

While the house has a cool contemporary feel with the abundant windows and cathedral ceilings, some of the updates, inlcuding the bathrooms, do not jive with the original style of the home. You’ll also have to look past the furnishings, the origins of which are way before the mid-20th century.