Can an ‘Eyesore’ Be Significant? 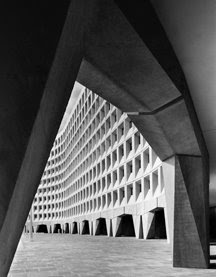 Marcel Breuer’s HUD Building
(GSA photo)
Some local modern buildings from the mid-century period were trashed in the Washington Post today. The piece, “An Eyeful of Washington Eyesores,” was based on submissions by readers who nominated what they thought are the “ugliest buildings or landmarks in the D.C. area.” Marcel Breuer’s HUD building in Southwest, Georgetown’s Lauinger Library by John Carl Warnecke and that funky blue 1963 building in Ballston just off 66, known officially as the Blue Goose, which is owned by Marymount University, made the list.

I used to live just down Glebe Road from the Blue Goose. I like the building and smile whenever I drive past. It sits there, proud of its various shades of mid-century blue and celebrating its uniqueness from the new cookie-cutter buildings that have popped up along Fairfax Drive during the past decade.While some people might not like Breuer’s HUD Building, the D.C. Historic Preservation Review Board approved the landmark designation of the 1968 Expressionist-style building in June. (Victor Lundy’s U.S. Tax Court was designated as well.)

“Under the Brutalist approach, architects embraced economy in construction, energy efficiency, and an enthusiastic use of exposed concrete, a material which had formerly been largely used for structural purposes only, not as a finish or decorative treatment,” the Review Board wrote in its designation of Breuer’s work. “Breuer took these ideals and, with the HUD Building, used elements of the Brutalist style in a highly Expressionist manner. The sweeping, curved form has a dignity and lightness to it that adds to its grace and distinguishes it from other works by Breuer and his contemporaries.”

These designations and the buildings’ nominations to be included in the National Register of Historic Places, is part of a major effort by the General Services Administration (GSA) Preservation Services Division to catalogue and preserve Modern-era federal buildings. During a recent D.C. Preservation League forum on evaluating the significance of modern structures, Kristi Tunstall, a preservation specialist with GSA, said that more federal buildings were built between 1950 and 1979 (34 percent) than any other time period.

The federal buildings by Breuer, Lundy and other mid-century modern masters emerged from President Kennedy’s establishment of the Committee on Federal Office Space, which produced a 1962 report that included the “Guiding Principles for Federal Architecture.”

Wow (as my one-year old son likes to say), a government committee that actually did something cool. Imagine that.