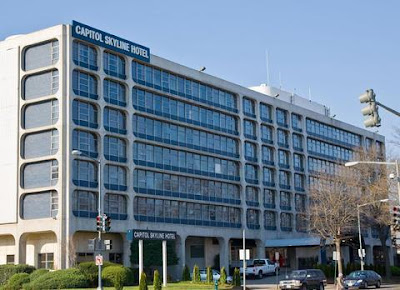 Lapidus’ 1962 Capitol Skyline Hotel
With his motto of “Too much is never enough”–a direct rebuke of modern master Mies’ “Less is more”–Morris Lapidus was completely rejected by the architectural elite during his career. Distraught from the years of harsh criticism, Lapidus actually threw away 50 years of his drawings. But toward the laters year of his life–he died at the age of 98 in 2001–the years of rejection turned to celebration as his own brand of Miami Modern (MiMo) designs became hot spots once again as they were back in the 1950s and ’60s, Think the Fontainebleau Eden Rock hotels on Collins Avenue and the Lincoln Road Mall in South Beach. In 2000, Cooper-Hewitt’s presented Lapidus with the American Original award, which was created for him. (See a good Charlie Rose interview with Lapidus shortly before he died.)

So it’s good to see Lapidus’ 1962 Capitol Skyline Hotel in Southwest and the period-sensitive makeover by the Rubell family getting props. The hotel and its Miami-like pool got the Hank Stuever treatment in the Style section yesterday and Fritz Hahn did a recent review of the various “pool parties” held on the weekends for singles and families alike.

Lapidus’ other hotel in D.C. is the Washington Plaza (formally the International Inn), which also has pool for lounging like a movie star. Lapidus always said that his goal was to create a fantasy world where guests could be actors. In addition to some buildings in downtown D.C., Lapidus also designed a townhome community in Southwest.