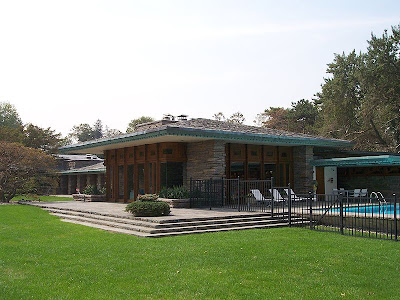 Max Hoffman House (1955). Photo by Steve Maxwell.
Calling all Frank Lloyd Wright fans. Join the Frank Lloyd Wright Building Conservancy‘s for Out and About Wright: New York on June 20. Start the day with a lecture at the newly restored Guggenheim Museum and then tour privately owned and rarely open Wright-designed homes in the picturesque Wright-planned community of Usonia in Pleasantville.
Wright carefully sited each house, approved all the plans and personally designed three of the residences within this community. Many of the other homes were designed by architects such as Paul Schweikher, Theodore Dixon Bower, Ulrich Franzen, Keneji Domoto, Aaron Resnick (here’s one for sale by Resnick) and David Henken.
Participants will be able to tour such homes as the Reisley Residence (1951) and the Serlin Residence (1949), while ending the day with a tour and dinner at the Hoffman Residence (1955) in Rye. See the full brochure here.