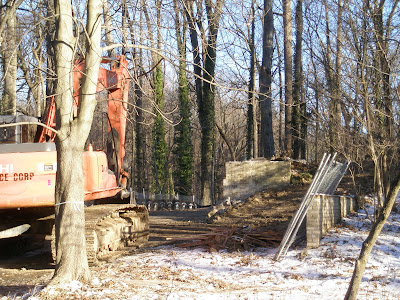 When I first wrote about Charles Goodman’s 1957 Muriel Ferris House, I feared it would be torn down. A small MCM home on nearly 1.7 acres in an exclusive neighborhood in McLean. I can now report that the flat-roof house has been destroyed, as you can see from the picture above. I regret never going to take pictures before it was torn down. At the event with Robert Lautman the other night, I showed him the images of the rubble of the home he photographed more than 50 years ago. There is an image he took of the home in the Fall 1999 issue of Modernism magazine for those who have it.