Modern in the Middle East 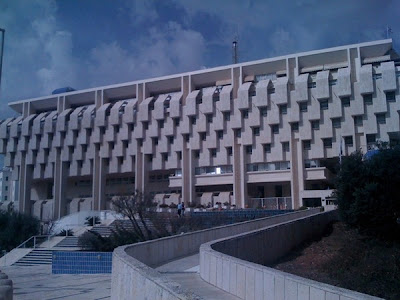 The Bank of Israel

It’s midnight here in Jerusalem and I need to go to sleep, but wanted to urge you to check out my twitter feed for some more images of some of the mid-century modern architecture here in Israel. The above shot is of the Bank of Israel building, designed in 1969 by Arieh and Eldar Sharon. Arieh Sharon studied at the Bauhaus and was a leading force in bringing the international style to Israel in the 1930s. See more on twitter. I’ll be touring the Bauhaus in Tel Aviv on Friday.