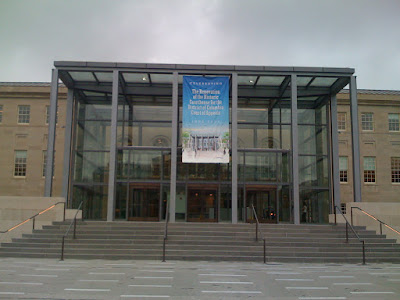 Here’s a shot of the modern addition to the Old City Hall building in Judiciary Square that’s now the new home of the District Court of Appeals. The Post‘s architecture critic Philip Kennicott gives the design by architect Hany Hassan the thumbs up. I love his reference to Mies’ MLK Library.

“The square glass box is a bit like the little black dress: elegant, never out of fashion and appropriate almost anywhere,” Kennicott writes. “Architecturally, it is one of the best things about the renovation. It repositions the entrance of the building from the south to the north side, where the courthouse is elegantly flanked by two lesser and later court buildings. The atrium is a rare, almost pure modernist gesture in a city where large public architecture generally tends to heaviness, compromise and bland decoration. A few blocks away, the glass box of Mies van der Rohe’s Martin Luther King Jr. Memorial Library is feeling vindicated.”