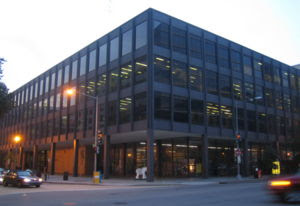 Washington Post columnist Roger K. Lewis, a practicing architect and a professor emeritus of architecture at the University of Maryland, writes about what should be done about modern buildings that may not have aged so well. He discusses the recent debates abut two D.C. buildings: Ludwig Mies van der Rohe’s 1972 four-story MLK Library (pictured above) and I.M. Pei’s 1971 Third Church of Christ, Scientist. Lewis says the buildings should be saved and be used as a base for changes that would make both structures more usable according to today’s needs.