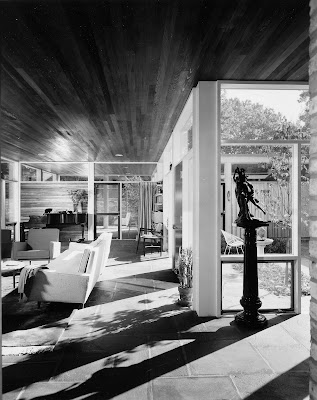 A 1954 photo by Robert Lautman of Charles
Goodman’s renovated farmhouse in Alexandria.
(Courtesy of the National Building Museum)
The National Building Museum is holding a discussion on Feb. 3 with Robert C. Lautman, Washington’s dean of architectural photography who chronicled the work of local modern architects such as Charles Goodman, Hugh Newell Jacobsen and Arthur Keyes. Goodman described Lautman’s work as having “…an effortless naturalness and clarity.”

In 2007, Lautman, who received the American Institute of Architects’ (AIA) Gold Medal for Architectural Photography and is an honorary member of the AIA, donated his photographic archives to the National Building Museum. In this special celebration of Lautman’s 60-year career, NBM curator Chrysanthe Broikos will hold a discussion with Lautman about his six decades of capturing architecture on film. The exhibition, Cityscapes Revealed: Highlights from the Collection, will be open prior to the program.

You can register for the program here.