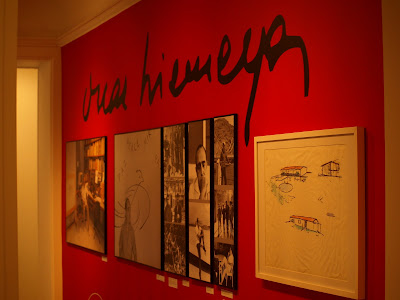 The Post’s Phil Kennicott reviews the Oscar Niemeyer retrospective at the Art Museum of the Americas that I previewed here.

“Niemeyer hasn’t chased trends, he hasn’t had a silly postmodern phase, dabbled in the Zen of glass boxes or blown apart his voluptuous forms in a nod to deconstruction,” Kennicott observes. “His career has had high and low points to be sure, but it has been remarkably consistent.”

He concludes: “Evaluating Niemeyer’s work is likely to make us uneasy, because it has been so obsessively consistent to one idea of the good life — bold, cool curves of oversize concrete set in empty, beautiful places — that has passed us by. And it’s not clear if that’s a good thing or not. Sometimes we fail to live up to our dreams, and sometimes the dream itself was the problem.”

My favorite part of the exhibit is how the curators superimposed Neimeyer’s rough hand, thick black-line sketches of his projects onto large Plexiglass panels (I thought I took a picture of one of these, but looks like I didn’t). They are works of art in themselves, especially the sketch of his own home in Rio. The House at Canoas, is a Miesian glass house with a large extended, thick, white flat roof with sensual tropical curves.