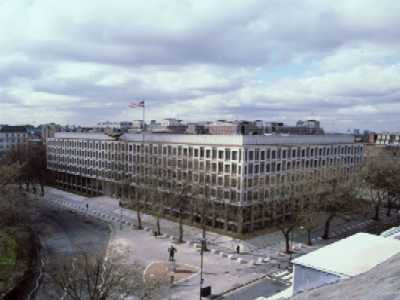 With the United States looking to build a new embassy in London, Eero Saarinen’s massive 1960 concrete and stone building in Grosvenor Square will likely meet the wrecking ball becasue it sits on prime real esate that is estimated to be worth close to $900 million. Peter Wetherell, a leading Mayfair real estate specialist, quoted in yesterday’s Post story said “any new owner would most likely raze the building to make way for a hotel, offices or homes.”

“While many people appreciate the historical significance of the embassy building,” Post reporter Kevin Sullivan writes, “it has drawn wide criticism as ungainly 1950s architecture dropped into a neighborhood that otherwise largely retains the ambiance of the 18th and 19th centuries.”

Jonathan Blyth of the State Department’s Bureau of Overseas Buildings Operations said “renovating the building would have cost up to $600 million, taken seven years and still not have resulted in state-of-the-art security” needed to meet standards imposed after 9/11.
Should the building be preserved? See some debate and comments here on a British architecture web site.