The Hirshhorn’s History: From Ontario to the National Mall 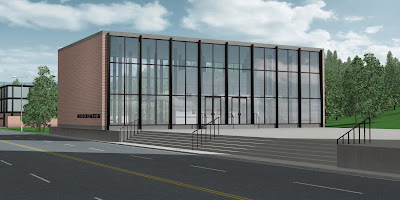 Hirshhorn Museum as Envisioned by Philip Johnson/Terence Gower
(Courtesy of Terence Gower and Sticky Pictures)
If Joseph Hirshhorn–a nice Jewish boy from Brooklyn who became known as the Uranium King–had his way, the Hirshhorn Museum and his collection of modern art would be in the wilds of Canada and not on the National Mall here in D.C. That story is a subject of a recently opened exhibit by Terence Gower in the actual Hirshhorn Museum designed by Skidmore, Owings and Merrill’s Gordon Bunshaft, and not Phillip Johnson, who Hirshhorn commissioned to design the town of Hirshhorn, Ontario.

In 1955, Hirshhorn wanted to build a “town of culture” near his mines as a Utopian place for the thousands of mining personnel he employed to live and as a way to give back to the area that helped him make his fortune. Neighboring towns, fearing that Hirshhorn and Johnson’s modern Utopian community would be such a draw for people, successfully killed their efforts to get the political backing needed to build the town.

In Gower’s small, but interesting exhibit, the centerpiece is an animated “marketing” video shown on a whole wall pitching the wonders of the town as if it had come to fruition. The town, as interpreted by Gower based on Johnson’s initial sketches, would be heaven for all those obsessed with Johnson’s Glass House and Mies van de Rohe’s Farnsworth House. Modern minimalism at its finest.

While his vision was defeated in Canada, Hirshhorn still wanted a permanent home for his massive modern art collection, which he filled by buying an average of two artworks per day after the mid-1950s. Eventually, Hirshhorn would exchange letters with President and Ladybird Johnson, paving the way for the construction of the Hirshhorn Museum and Sculpture Garden on the National Mall. 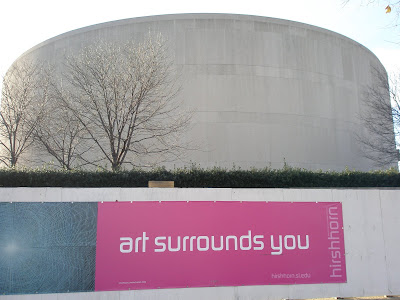 So instead of a glass encased Phillip Johnson design, the 1974 Hirshhorn is a cylindrical concrete mass sitting on four large, curving, concrete piers containing staircases. Most of the windows face inward onto a courtyard with fountain. 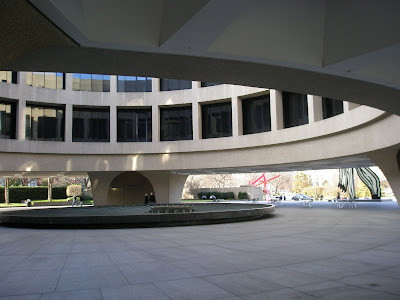 “Gordon Bunshaft designed the massive cylindrical form of the Hirshhorn Museum specifically for the exhibition, study, and storage of Joseph Hirshhorn’s art collection, one of the major modern painting and sculpture collections in the United States,” SOM’s web site says. “The architectural design allows the flow of space around and under the circular form, extending the visual experience to the other buildings of the Smithsonian and expressing internal circulation.”

We’re lucky those Canadian towns did not want Hirshhorn’s museum, and rest of his Utopian center of culture, nearby.