Visiting an Icon: The Eames House 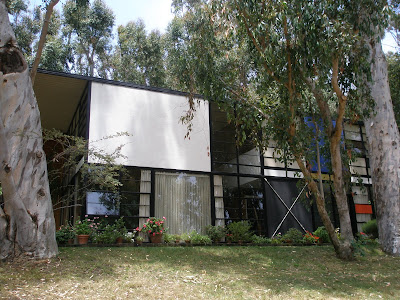 A shot of the Eames House from the meadow.
Los Angeles—The first thing that hits you as you walk up the long driveway to the Eames House (Case Study House #8, 1949) in Pacific Palisades is the pungent, sweet aroma of flowers. As you turn the corner, you first see the studio (1,000 square-feet) and then the house (1,500 square feet). The buildings, which are both 20 feet wide and 17 feet high with loft spaces, are separated by a courtyard. The structures are set back on the lot, with a large meadow reaching to the edge of the cliff, which overlooks the Pacific Ocean.

The house is left as it was when Ray Eames died in 1988. (Charles died 10 years earlier to the day.) While you are not allowed inside the house or even to take pictures of inside the house, the sliding glass doors are open by the living room and kitchen, allowing the yellowing George Nelson lamp hanging from the 17-foot ceiling to sway gently in the Pacific breeze. The linoleum tiles put over the concrete floors a few years after the house was built are cracked. Books and other household items in the original kitchen remain frozen in time. The house is filled with–big surprise–various Eames chairs.

The original design for the house, which aimed at meeting the needs of a married couple who were designers and essentially apartment dwellers, was created in 1945 by Charles and Eero Saarinen. The design was known as the Bridge House, “a single-story, steel-framed box cantilevered from the hillside on two slender columns, floating across the meadow,” according to a brochure I received at the house. With materials short because of World War II, the pre-fabricated, off-the-shelf materials for the house were not delivered until late 1948. During the delay, Ray and Charles fell in love with the land and decided to create two structures parallel to the meadow rather than one building that would slice the meadow in half. 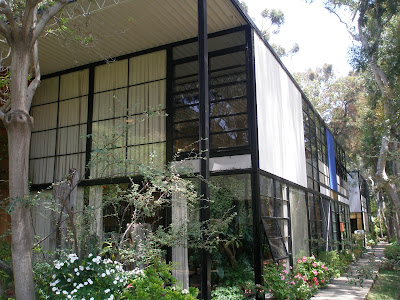 A shot of the living-room side of the house
with the studio in background. 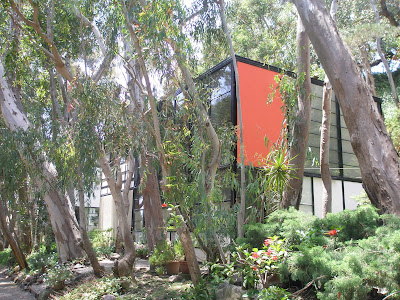 The studio with orange-painted panel over door. 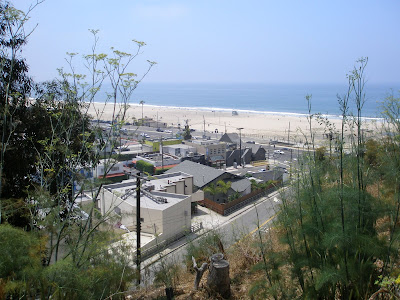 View of the Pacific from the meadow.
Today the house is administered by the Eames Foundation. You can take an exterior tour of the house my making an appointment. The tour is free, but a $5 donation is suggested. When I arrived, there were no other visitors at the house so I had a one-on-one tour/discussion with David—one of the Eames House docents—who is an architect. One day a year, Eames Foundation patron members can actually tour inside the home.
While the Eames House is not for sale, the Case Study House #9, designed by Charles Eames and Saarinen for John Entenza, the editor and publisher of Arts and Architecture magazine and the father of the Case Study House Program, is still for sale for $14 million. The house, which is next door to the Eames House, now serves as the guest house for a massive newer modern home by Barry Berkus. I peeked over the fence to get this shot below. 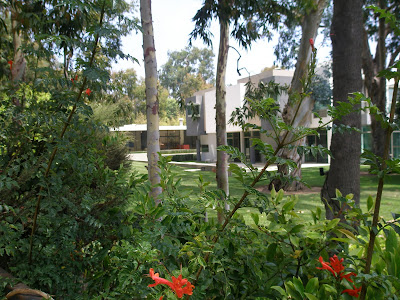 Case Study House #9 in the background
can be yours for $14 million.
If you are planning to go to LA make sure to make reservations to visit one of the most iconic homes—mid-century modern or not—in the world. Entenza said that the Eames House became so iconic because the house “represented an attempt to state an idea rather than a fixed architectural pattern.” Yes, it could be that. The beautiful meadow, abundant flowers and eucalyptus trees and killer view does not hurt either.